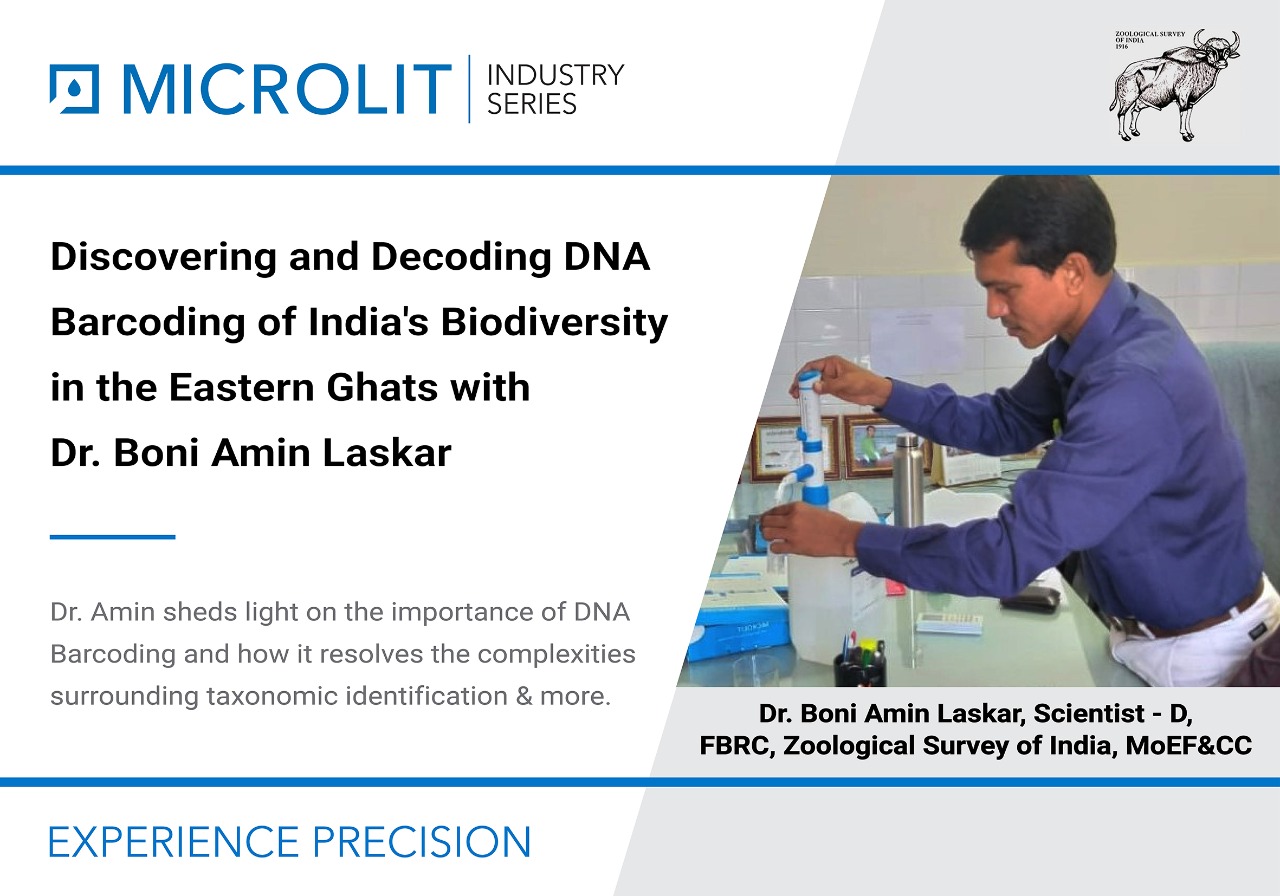 Disclaimer: This discussion consists of personal views & experiences and does not represent the views of the organization as a whole.

Team Microlit: Tell us a bit about your role & responsibilities. What significance does your institute – Freshwater Biology Regional Centre (FBRC) – hold for the Zoological Survey of India (ZSI)? What kind of research activities does FBRC commonly undertake?

Dr Amin: I am a Scientist-D at FBRC, and have been assigned with the responsibility of DNA barcoding of aquatic animals, particularly freshwater animals. The Zoological Survey of India (ZSI) is a subordinate office of the Ministry of Environment, Forest and Climate Change (MoEF&CC). It’s a pioneering institute responsible for biodiversity documentation of the Indian fauna. Our institute, FBRC, is one of the 16 regional centres of the ZSI. Currently, out of the 16 regional centres, only 4 centres including ours have a dedicated DNA barcoding lab. The principal DNA Lab is situated at ZSI’s headquarters in Kolkata, West Bengal.

At FBRC, besides DNA barcoding, we also study bio indicator species like zooplankton and a few other aquatic insects. By understanding their density, abundance and diversity, we can categorise the pollution levels of aquatic bodies. Apart from that, we examine aquatic ecosystems & their composition, how they used to be and how they have changed with the times.

Dr Amin: Taxonomic identification of animals is carried out with the help of certain tools & techniques. Traditional ones include morphological observation, manual documentation of characters and microscopic studies. These are not efficient in some cases. We know that two samples that are apparently identical may not belong to the same species; this is a complexity that traditional methods fail to resolve.

That’s why the ZSI decided to conduct its taxonomic identification procedures with the help of DNA barcoding. We have been using this technique since 2010. Although this modern method is not devoid of limitations, we can identify species even with access to a part of the animal or it’s remains thereof. Since it has helped us generate satisfactory results, more of our regional centres may set up DNA barcoding labs.

Team Microlit: Let’s discuss the advantages of DNA barcoding in detail. Also, are there any limitations associated with this process?

Dr Amin: Sure. As I mentioned, in DNA barcoding, we study the mitochondrial gene. This helps to correctly and conveniently resolve a number of complexities surrounding taxonomic identification because every organism has its own unique genetic structure, regardless of whether they belong to the same species or not. It also informs how different species have transformed over time.

DNA barcoding is not applicable to species that exhibit polyploidy or those who are hybrid organisms. It is only applicable to organisms that reproduce sexually. This is because, in this technique, we are considering the mitochondrial gene which helps us extract data regarding maternal inheritance.

Team Microlit: Are your sample collection activities limited to Hyderabad only?

Dr Amin: No, there’s no regional limitation on sample collection. Since the ZSI is a subordinate office of the MoEF&CC, we can invite any organisation or institute from across India to work with us on environment impact assessment. We can also initiate a proposal from our side to undertake research on the fauna of different water bodies across different regions.

Team Microlit: Then, how do you choose the region/area for sample collection?

Dr Amin: Take for instance, my existing region of focus: Eastern Ghats, particularly the Northern Eastern Ghats. We first examined the documentation that already existed on the region. The ZSI had published a report on the Eastern Ghats during the mid-1980s. Other institutes published their own reports as well including individual experts carrying out their personal research work. After a thorough analysis, we concluded that there was a shortage of DNA data on the animals local to the region. That inspired me to undertake a project on the Eastern Ghats and gather more and more data from the area.

Team Microlit: Can you tell us about a few key assignments/milestone projects that you have undertaken?

Dr Amin: I undertook a key project with Mahseer, a fish, as my subject of study. There’s a species of Mahseer called Tor progeneius which was reported in 1839. Post that, the identity of this species remained a subject of confusion; it was identifiable but wasn’t categorised properly. In 2009, I started my study on Tor progeneius. It was an arduous task to procure it in the first place. I went through all the records but in vain. Eventually, when I was able to compare Tor progeneius against Tor putitora (a species of Mahseer reported in 1822, 1829), I discovered that the two had a few morphological differences but not enough to categorise the former into a new species. My analysis paper, which was accepted and published in 2012, was based on DNA barcoding and morphological data, among others.

I subsequently published more papers centred on DNA barcoding in 2013 and onwards. I applied DNA barcoding to resolve a lot of complexities and was able to benefit taxonomy at a large scale. I’m still continuing with my research; the field is expanding at a good pace and has an incredible growth potential. Besides these studies, I was fortunate to be invited to a conference organised by The Barcode of Life Data System (BOLD) in Malaysia, meet scientific researchers from the world over and listen to their papers.

Team Microlit: What types of specimens do you usually work with? How do you analyse them? How has Microlit Scitus been of help to you in your experiments?

Dr Amin: We work with all types of specimens – from microscopic species to bigger ones like crabs, amphibians, reptiles etc. Sometimes, we even receive remains like skin, tissues, bones, etc. Once a specimen has been procured, we follow the usual method of analysis – DNA isolation, amplification of the target marker, sequencing and then analysing the DNA sequencing data.

We are currently using Microlit Scitus (10-100 ml) to dispense formalin. Formalin is used to preserve specimens. Besides that, during DNA isolation and later steps, chemicals like phenol, alcohol, chloroform, etc. are also needed. Dispensers come in handy while using them.

Team Microlit: Are you satisfied with Microlit Scitus? Would you recommend it to your network?

Dr Amin: Yes, we are satisfied with it and will happily recommend its usage. It is convenient, easy to handle and accurate. In fact, we are planning to go for a couple of more Microlit dispensers.

Team Microlit: There has been an increasing consensus that we must avoid using plastic as it harms aquatic organisms. What are your views on this?

Dr Amin: Plastic waste deteriorates water quality. Once that happens, many organisms cease to live in the polluted water body. Sensitive and important organisms die while sturdy, unimportant organisms thrive. With a number of crucial aquatic species like indicator species going extinct due to plastic waste being dumped in our lakes, rivers and seas, biodiversity is disrupted. Losing an entire species means losing their DNA and subsequently degradation of genome quality. It’s important to not let that happen.

Team Microlit: It was a pleasure to talk to you Dr Amin. Our last question is: What’s your message for students and budding researchers?

Dr Amin: Well, thank you. I wish for the students and young researchers of our country to collaborate as effectively as possible with others and to not work in isolation on a problem. For instance, if you are involved in the preservation of freshwater ecosystems, think not only of the water body, but also of what lies in its surroundings – a water body with a proportionate vegetation cover around it has better chances of thriving for years to come.