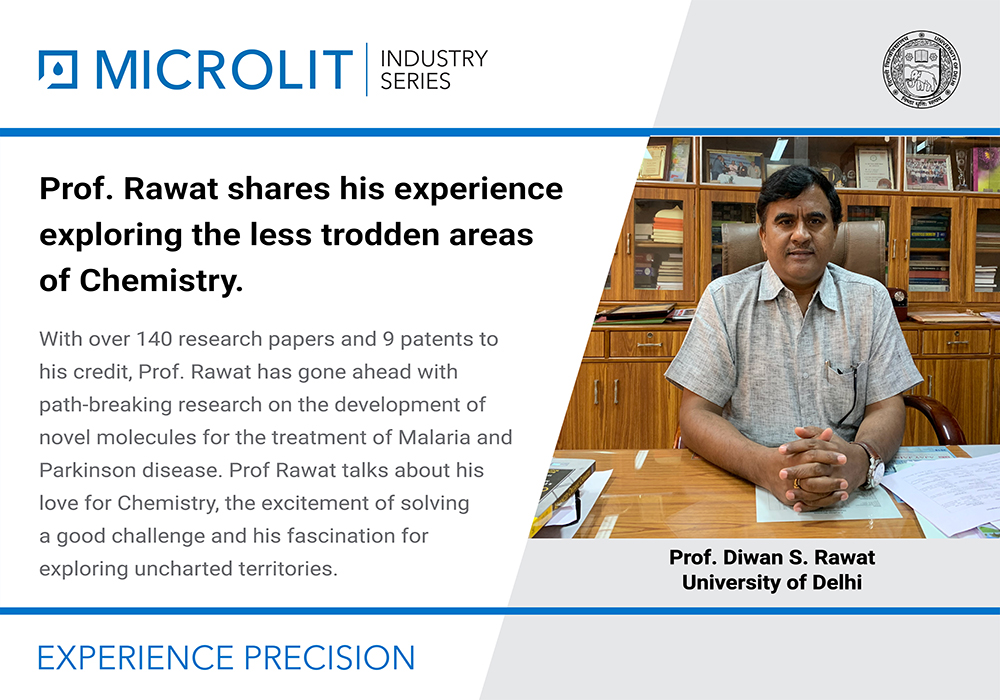 Team Microlit: What inspired you to choose Chemistry?

Prof Diwan S Rawat: I chose Chemistry because it is a fascinating subject – it poses a lot of challenges as well as opportunities. Look around and you’ll realize that Chemistry is everywhere. In fact, life is not possible without it! Speaking from a statistical point of view, we have Chemistry to thank for the immense improvement in the average human lifespan today. For me, to be associated with areas like these means constantly contributing towards the welfare of humanity

Did you know that when a chemist synthesizes 10,000 organic compounds in the lab, only one compound comes to the market as a drug? The average human lifespan has improved from 23.5 years in the 1900s to 68.5 years in India, owing to the invention of many crucial vaccines and drugs.

Team Microlit: Wow, indeed fascinating! That brings us to a book that you have co-authored ‘Bioactive Marine Natural Products’; it’s touted as an interesting and informative read for the students of Chemistry. Not only that, you have many patents and research papers to your credit as well. Please tell us more about that.

Prof Diwan S Rawat: When I had joined DU in 2003, I was looking to set up my research laboratory. The then Vice-Chancellor, Professor Deepak Nayyar, and the Pro-Vice-Chancellor, Professor CR Babu were more than happy to extend their support. However, I knew that establishing a functional research laboratory at the university would take around 2 years, so I decided to do something worthwhile in the meantime. I co-authored a book,‘Bioactive Marine Natural Products’, which deals with the Chemistry and Biology of organic compounds isolated from sea. This was the beginning of the journey and today, I have 140+ research papers, 9 patents, 4250+ citations with h-index 40. I could achieve all this because I was lucky to have some brilliant PhD students to assist me, over the years.

During 1993-1997, when Prof Diwan S Rawat was a PhD student at Central Drug Research Institute (CDRI) , his PhD supervisor, Dr DS Bhakuni, FNA was working on ‘Bioactive Marine Natural Products’ but could not get it published for some reason. Prof Rawat eventually took it up and the book was published by Springer in 2005. A review of the book was published by the Journal of American Chemical Society in 2006, one of the most reputed journals in Chemistry.

Team Microlit: Your research on Malaria using Aminoquinoline based hybrids for its treatment has received patents from India and the US.You have also worked on anti-cancerous properties of turmeric. How did you work your way through the challenges that these projects posed? How was the experience like?

Prof Diwan S Rawat: When I joined NIPER, Mohali in 2002 the then Director wanted me to work on Malaria. Since I had not worked on it before, I immediately agreed. The Plasmodium that causes Malaria has different species – the most common is Plasmodium vivax and the more notorious one is Plasmodium falciparum; the latter can’t be treated with Chloroquine but with another drug called Artemisinin. CDRI had worked on this molecule and it’s available in the market today.

During that time, I came across a paper published in the Journal of Medicinal Chemistry in 1992, which talks about antimalarial potential of another class of compounds called tetraoxane, but only a few papers were published on it in the following 10 years. So, I decided to work on tetraoxane based antimalarials and submitted a grant application to Council of Scientific and Industrial Research (CSIR).

By the time it was sanctioned, I had joined DU. We were the first to work on tetraoxane based antimalarials in India. One of my students, Dr Himanshu Atheaya accompanied me. Though it was arduous to work, especially in the absence of an NMR instrument (Nuclear magnetic resonance) at the university then, but we managed and were able to prove that tetraoxane had antimalarial properties and was as effective as Artemisinin.

During the same period, I asked a new MPhil student to work on a project related to molecular hybrids. The concept was simple; if somebody falls sick, sometimes the doctor recommends two tablets to treat the disease. So we thought, why not hook up the two drugs chemically and see what response it generates. Eventually, we were able to validate our concept by proving that hybridisation of different molecules leads to new drug candidates with improved potency.

As you rightly said, we also worked on anti-cancerous properties of Haldi, i.e. turmeric. There are many issues with the curcumin molecule; it gets metabolised and isn’t stable enough to be made into a drug. We successfully modified that and removed the structural limitation in a way so that the anti-cancer activity stays and the stability also increases.

Team Microlit: What spurred your study on Parkinson’s disease, right after you had completed a pivotal research project on Malaria?

Prof Diwan S Rawat: Oh, it was from literature! When we published our work on the hybrid concept and showed that our compounds were 75x more active than Chloroquine for Malaria treatment, I came across a paper published by Sanders in ‘Nature’ in 1987, where he had concluded that Chloroquine can also be used for the retardation of Parkinson’s disease. I was intrigued by that and noticed that no one had taken up the work further.

Since we had already synthesized compounds that were as effective as Chloroquine in treating Malaria, we thought why not evaluate these compounds against Parkinson’s disease as well. So, we got in touch with Professor Kwang-Soo Kim, Harvard Medical School/McLean Hospital, Boston, US and began collaborating with him officially. He had already tested 960 drugs against the Parkinson’s model and got 3 hits – Chloroquine and two other molecules similar to Chloroquine.

Initially, we screened about 120 compounds and got a few hits against Parkinson’s disease. Later, we got a research grant from the MJ Fox Foundation, USA for this work and tested about 650 compounds. We got 15 lead molecules, which were more effective than Chloroquine for Parkinson’s.

Now that we have received a US patent and detailed biological testing is also going on, we are hopeful to soon have some clinical molecules in hand.

Team Microlit: Although, there is a rise in the adoption of green practices when it comes to chemical processes across the industry, experts also suggest that we still have a lot of ground to cover. What are your views on this?

Prof Diwan S Rawat: The lack of environment-friendly procedures that can minimize the waste generation during the chemical process has always bothered me. In order to address the same, my team has also been working on nanocatalysis. During catalysis, we try to make use of nanomaterials for the synthesis of biologically active compounds, so that, eventually the process is greener, which means that it minimizes waste generation.

GETTING TO KNOW PROF DIWAN MORE

Team Microlit: You have been both in India and Japan as a faculty. What are the major differences that you find in the two?

Prof Diwan S Rawat: The biggest difference is that their research is industry-oriented and funded by the industry whereas, in India, the funding comes from the Government which tends to get bureaucratic sometimes. In India, we also need to work towards better infrastructure. There is a need to bridge the gap between the industry and academia and involve more people who work in policy-making.

Team Microlit: What do you like doing in your spare time?

Prof Diwan S Rawat: Reading is an integral part of my routine; it’s necessary to stay updated. I like to visit historical places and understand the science behind the architecture of the monuments. Other than that, I like listening to old songs and spending time with my family.

Team Microlit: What’s the most interesting thing you have read or seen this week?

Team Microlit: What’s your message to the students/young researchers?

Prof Diwan S Rawat: There is no alternative to hard work. Whatever you pursue, Chemistry or otherwise, do it in a focussed manner with continuous reading and practice.

Prof Diwan S Rawat hails from Raikholi, a remote village in Bageshwar district of Uttarakhand, where he studied till class 9. He did his Masters from Kumaun University, Nainital and topped it. After completing his PhD from CDRI, Lucknow,he worked for a year at Panchsheel Organics Ltd, Indore and then a year at Lupin Labs, Mandideep. In 1999, he moved to Indiana University and worked there for two years and later for a year at Purdue University. Upon returning to India, he secured in-absentia appointment from NIPER, Mohali and proceeded to join the institute in 2002. Later, he got another in-absentia selection in the University of Delhi (DU) as a Reader and joined it in 2003. In 2010, he became a full-time Professor at DU.