Microlit is proud to present the most advanced, state-of-the-art dispenser in the world: ULTIMUS.

With this Bottle Top Dispenser, Microlit’s R&D has solved the biggest problem of users: Re-filling the bottle and rinsing the instrument WITHOUT the need to DISMOUNT it from the bottle.

ULTIMUS is the First Ever Dispenser which offers four modes of dispensing: Dilution, Rinsing, Dual Liquid Handling and Re-circulation in a single unit.

This introduces a new technology to the World. Currently, the ordinary Bottle-Top Dispensers available globally have a single inlet only from the bottle on which the instrument is mounted. ULTIMUS has dual inlet. This allows the flow of liquid from two separate sources independently.

This great and innovative design feature has achieved the following recognitions till now: 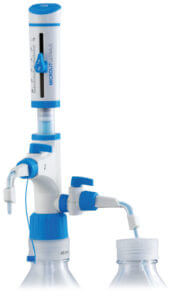 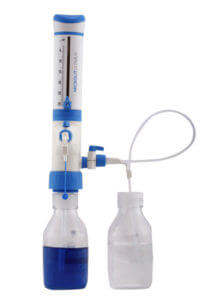 ULTIMUS – Bottle Top Dispenser: The user can perform rinsing just by changing (opening/closing) knobs of the instrument which connect and disconnect the primary (reagent) bottle and secondary (distilled) bottle. No dismounting is needed.

ULTIMUS – Bottle Top Dispenser: The user can perform dilution just by changing (opening/closing) knobs of the instrument which connect and disconnect the primary (reagent) bottle and secondary (distilled) bottle.

Ultimus eliminates this problem completely as the vapours/fumes of the reagent do not come in direct contact with the dispenser at all. The reagent is placed in the secondary bottle which is not mounted on the dispenser. Thereby, simplifying the life of the user who then does not have to go through the cumbersome & dangerous process of daily cleaning.

In applications, which might require regular bottle refilling, the Microlit Ultimus provides the facility to have its second inlet constantly immersed in a bigger container for ease of use. Thereby, eliminating the need to remove the bottle from the dispenser every time its empty.